Roy Yamaguchi was an avid sailor before WWII and one of the founders of the Japan Sailing Federation. The Snipe was first introduced in Japan in 1947 and in 1956 Roy founded SCIRA Japan/Japan Snipe Association and facilitated formation of the first chartered SCIRA Snipe fleet in Japan (Kanto Fleet #428 in Tokyo). In 1957 he was the first Japanese to compete in the Snipe World Championship, held that year in Portugal. In 1960, he was elected to the SCIRA Board of Governors. He attended the 1961 Snipe Worlds Championship in USA and supported the Japan national team as a sponsor for that event. Two additional Japan Snipe fleets were chartered by 1963, with over 45 Snipes and 80 SCIRA members in the three fleets. Roy is considered as the “father” of SCIRA Japan, which has grown to 15 Snipe fleets over the ensuing years. Japan now has a large base of registered Snipes and many SCIRA members, and racing includes competitions for national, high school, intercollegiate, women, master, junior and business team championships.

Roy was also active in formation of other one-design racing classes in Japan, including Finns and Dragons. Roy raced in the Dragon class, and in 1963, he had a custom 5.5 meter racing yacht built for the 1964 Tokyo Olympic Games, and participated in qualification racing for the Olympics. Sadly, Roy passed away later in 1963 at age 42 following a short illness, but the boat was used as a representative boat. In 1994, Roy’s widow Gertrude along with Motoko and Fujiya Matsumoto, arranged with SCIRA Japan to dedicate the Roy Yamaguchi Memorial Trophy Women’s World Championship, in Roy’s honor, and the first competition for that award was held in 1994 in Yokohama. Roy was remembered for his contributions to yachting associations in Japan, and the goodwill he fostered through sailing. 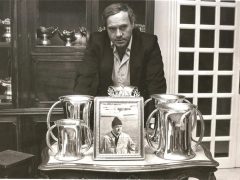