A person is not defined by their accomplishments, but if they were, Earl was a god. He had the Midas touch in any boat, but his reputation was deepest in the Snipe class. Earl started sailing Snipes in Mission Bay, CA where he won four national championship trophies before 1963 when he got out of the Navy.

“Earl is quite possibly the most natural sailor I have ever crewed for, or competed against,” said Dave Ullman.

But Earl wasn’t just about winning; he was about making. The DNA of the modern Snipe is that of Earl. He helped to create, along with Herb Shear, the Chubasco Snipe. Not only was he influential with hull design but with Elms Sails and Cobra Masts, he continued to move the class forward.

Earl was also known for not just developing the boat but also the people. He had a philosophy that you needed to help your competitors to become better sailors so that you could become better yourself. Many a young San Diego sailor starting by crewing for Earl or learning from him.

Id Crook said Earl Elms invented kinetics in the Snipe class. When Earl was going downwind having a beer, he would raise the beer up to drink it, leaning his body out over the side. Then Earl would lower the beer and lean in. And the cycle would continue. He was always willing to share his knowledge and help you with your boat, so long as you repaid him with a beer. 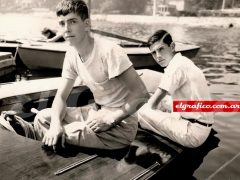