In the summer of 1972 Brainard Cooper was a serviceable Snipe crew sitting in the bar at the Florida Yacht Club in Jacksonville, FL while his skipper, future Snipe commodore Dan Williams was working with a crew measuring Snipes in preparation for the US Nationals. Brainard had raced Snipes while in high school and had crewed for young Billy Roberts at the US Junior Nationals in 1952, finishing second. He had at various times crewed for 1952 Commodore Owen Duffy and a college senior named Harold Gilreath, who in later years also became a Snipe Class commodore. After 10 years away he had returned to Chattanooga, TN in the mid-sixties and rejoined Privateer Yacht Club, sailing on Chickamauga Lake, one of the “Great Lakes of the South.” He and Williams had won the Southern Snipe Championship, and the party, in 1965 and again in 1970.

Leaving the yacht club bar, Brainard decided to see if the measurers needed any help. Of course, they always do, and he was put to work measuring the transom of Commodore Dick Tillman’s new Snipe. The chines were low! He considered going back to the bar! After calling for back-up, it was determined that the chines at the transom were indeed low and Tillman, who Brainard had met in 1952, made the corrections with a grinder.

After that inauspicious start, Brainard became fixture at national and later international events. He worked with measuring crews at World and Hemisphere Championships in California, Florida, Denmark, Portugal, France. Italy, Japan, Argentina, Uruguay and Brazil. Brainard was named US National Measurer and appointed to the Rules Committee in 1987.

In his first year as a member of the Rules Committee, he was instrumental in establishing the rule eliminating Jib hanks, though he was always careful to say that it wasn’t his idea – that others deserved the credit. “All I did was convince some key members of the committee that it was the way to go. And I wrote the rule that was adopted.”

In 1991, with the aid of Commodore Means Davis, Brainard was instrumental in gaining Rules Committee approval allowing sailors to place advertising on their boats, sails, and equipment.

When he became chairman of the Rules Committee, Brainard established email as the primary means of communicating between the far-flung members of the committee. And he hung a sign above his computer screen that stated “No Rule Is Better Than the Fool Enforcing It.” His goal, he said, was to never be the “Fool” the sign referred to. In 1998 he was the first Rules Committee chairman to attend the European Championships when they were held at Porto. He was the SCIRA representative on the measuring crew for the 1999 Pan Am Games in Canada.

As chairman, Brainard led the committee in standardizing mast length, rudder gudgeon and pintle placement, and centerboard height, all of which had been unique to each of the several Snipe builders. He also converted the Rule Book to the metric system. The SCIRA Board of Governors elected Brainard commodore of the Class for the year 2003, following which he served as ISAF representative for 5 years, retiring when he reached age 70 because, “the Snipe is a young person’s boat, and they don’t need guys my age telling them what to do.”

Brainard had by then become involved with race management, and as US Sailing Regional Race Officer ran several national championship-level regattas.

After seven years, SCIRA USA brought Brainard out of ‘retirement’ to serve as US National Secretary. Health issues forced him to re-retire in 1980-2015, so recently he has been main sheet trimmer on a J-92 in club races at his home club in Chattanooga.

Speaking of his long involvement in Class management, Brainard says, “The Snipe Class, to my mind, is the first and best; I’m a Snipe guy for life. I felt I should listen to the sailors and be responsive to them. I always thought of myself as a sailor first and a measurer or administrator after that. I would hope that I wasn’t the “Fool” mentioned in that sign over the computer too often.”

When asked, Brainard expressed that he was “honored and humbled beyond belief to be considered with the founding lights of the Class and the great champions, many of whom are good friends, and, of course, my dear friends Gonzalo and Bibi. 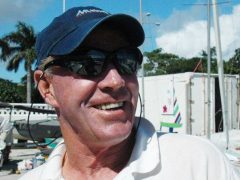