Agustin (Augie) Diaz was born in 1954 at Havana, Cuba and started sailing in 1966 at age 12. His father Gonzalo Diaz is a well-known and successful Snipe racer and promoter of the class (Havana and Miami FL) and was inducted into the SCIRA Hall of Fame in 2019 for his achievements over the past 75 years. You can assume that Augie received a lot of great coaching and inspiration from his father (and Mother Carmen too!).

Augie received awards for Collegiate All-American Sailor (1973-75) and College Sailor of the Year in 1974.

Augie also received the award for US Sailing Rolex Yachtsman of the Year (2003). Now at age 64, Augie is an inspiration to us all – a fine gentleman and sportsman and mentor. We look forward to his many fine performances and contributions In future years.

So, it is most fitting that Augie was selected as a SCIRA Hall of Fame inductee for 2020. 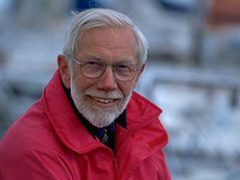