“Serious Sailing, Serious Fun” was definitely Jerry Thompson’s motto in life and no one lived it more than JT.

Born in Seattle, Washington on January 30, 1939, his sailing career blossomed early after the Thompson family moved to Long Beach in the 1940s where he sailed a Naples Sabot in Alamitos Bay. In consecutive years 1952 and 1953, he was Junior National Champion of the Naples Sabot class. The Naples Sabot class is the Southern California breeding ground for multiple Olympic and America’s Cup sailing champions. In 2005, Jerry came back to claim the Sabot Masters Championship. He also campaigned in the Lido 14 class winning the Class championship trophy in 2012. Jerry was a long-time distinguished member of Alamitos Bay Yacht Club and he served as Commodore of the Club in 1971.

At Long Beach Wilson High School, Jerry was a standout basketball player on the Varsity squad earning all-city and all-coast honors. Following High School, he went into the family business and alter became the owner of Bailey Manufacturing, which produces rehabilitation and physical therapy equipment. The business venture took the Thompson family including Jerry, his wife Nancy, daughter Kim and son Brad to Akron, Ohio for several years in the 1970s where he sailed Snipes in the Midwest before returning back to his sailing roots in Long Beach.

Jerry’s sailing resume will best be remembered for his time in the International Snipe Class. He arguably has logged more hours at the tiller, sailed more regatta, and owned more Snipes that any sailor in the history of the Class. He sailed his first Snipe in Alamitos Bay as the age of 13 and later qualified for the Western Hemisphere Championship in Bermuda at age 17 where he placed fourth. Since that time, Jerry sailed in multiple World, Western Hemisphere, North American and US National Championships. In 1975 he was the North American Champion and in 1988 he served as Commodore of SCIRA. His Snipe career extended into the Masters Circuit where he was a seven-time US National Champion. He was a true Corinthian who earned the admiration and respect of sailor’s worldwide for his sailing skills, camaraderie and boyish prank 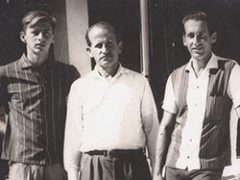