A customer would call me occasionally to say that he was ready for another key to the kingdom. He knew that he could not absorb everything that I could teach him at once, so the arrangement was that he would let me know when he was ready to learn more tricks. He would call these tidbits the keys to the kingdom. What follows are some of the little tricks that can keep you busy this winter, and help improve your sailing.

The common hurdle for those practicing roll tacks and gybes is security. Following the roll, the effort to cross the boat is similar to climbing up a hill. In this situation, if you can't climb the hill you get wet, which is a significant penalty. Confidence begins with securefootplacement, which must allow you to push hard to begin this climb. This task is difficult without support.

The Eclipse, Jibe Tech, Mueller and Persson hulls have designed their floor liner so that it wraps up to the deck, offering the feet a wall to push against.

However, McLaughlin and Phoenix hulls offer no such support. The addition of teak strips to the floor (see photo) is an easy task that gives the critical support the feet need. 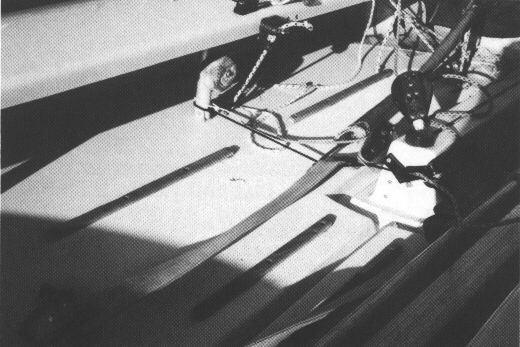 Teak strips added to floor of cockpit for ease of "pushing off.

The crew needs a single length on either side for the initial push. Once started across the boat, their next step can use the daggerboard trunk for support. The skipper needs both a strip on each side and then a strip on either side of centerline. I have found the center strip to be critical for offwind gybing at close angles, particularly if it is 20 knots and you are gybing just before the leeward mark and then rounding to go upwind. After watching my feet go out from underneath me more than once a few years back at the SCIRA Midwinters, I was possessed to address this problem.

The only mistake I have made when mounting the teak is not to drill the last screw holes close enough to the end. In use it is possible that your foot will push off at the end of the strip, which will break the tip of the strip if it is not fastened there.

You are coming into the leeward mark on starboard lack, about to retract the pole and gybe. The crew releases the launcher line and the pole gets stuck in the boom vang, the main can't gybe and the leeward mark never gets rounded. All the benefits of the pole launcher seem to be lost in this one instance.

There are two common problems when retracting the pole. The first is if the pole does not travel in a parallel plane as the boom, the inboard end will either he aiming into the boom (starboard tack) or away from the boom (port tack). Both instances will cause friction points to slow the pole's travel back, plus on port tack the inboard end may hit the crew and on starboard tack the pole can either tear the main or get hooked on the boom rigging. The solution is to give the jibsheet a quick pull when releasing the launcher line, which will keep the outboard end of the pole from blowing forward and becoming "unparalleled". This will ensure that the beginning of the pole's retraction will go smoothy, guaranteeing the rest of the action to be a smooth.

Even when the jibsheet is pulled, the pole can hook on the boom rigging if the sheet is pulled a little too much or too little. By raising the pole's travel point at the mast, the inboard end is moved high enough to minimize this retraction snafu. To accomplish this, mount a swivel block (Harken #166) with the eye strap (Harken #281) vertically to the mast at a point 5" (13cm) above the gooseneck and at 80 degrees back from center. 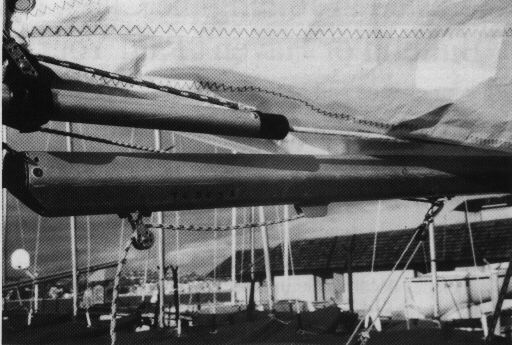 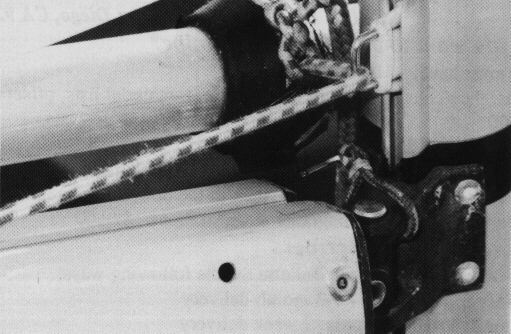 On my boat the shock cord begins at the boom's vang fitting, goes forward through the bail and connects to the collar. Both of these changes effectively move the travel point higher, keeping the inboard end of the pole up and away from the outhaul or vang rigging when it is retracting.