Confessions of a Women's Sailing Convert

At right: Lisa Pline and Sherry Eldrige in Japan 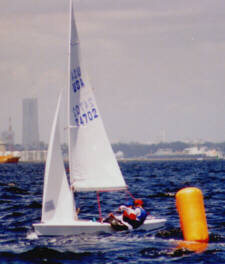 I used to disagree with the concept of having separate Women's Snipe events....."Why do we need a separate event?" I asked. Isn't that one of the great things about the Snipe, that men and women can compete equally? My memories of women's sailing in college were mixed -some positive, but also some memories of discovering where the cat-fight stereotypes come from. And besides, what would the parties be like, quilting bees? I just wasn't all that enthused.

Then I went to the First Women's Snipe Worlds in Japan. It was the experience of a lifetime. And I learned.. I learned that women Snipe sailors were just like all Snipe sailors - great people. Great people to compete against and to party with. The camaraderie was excellent. No cat-fights to be found anywhere. And I learned. I learned that while I have always felt the ability to compete equally, not all women have had the same opportunity. One of the top teams said that they had had a hard time even getting a boat to practice in because they were women. Another told me they were generally ridiculed for wanting to sail at all, much less steer. And I learned. I learned that an international event is like no other. Not only was the event well attended (46 boats from Japan, Norway, the US, Uruguay, and France), the competition was excellent. Starting techniques vary around the world, as does boat set up, steering style, etc. I learned that pounding on the deck can be an effective substitute for English at mark roundings, too! And I learned. I learned that the Japanese have been conducting a Women's National Championship for the past 10 years. Maybe they were on to something...

Then I went to the Second Women's Worlds in Spain. And I learned that my previous experience in Japan had not been a fluke. The same great camaraderie, the same stories of bias in some countries, the same level of competition, and this time 9 countries were represented! And I learned one more thing, that having a separate women's event was a great way to promote the Snipe Class. Several of the competitors had not sailed in the Snipe before training for the Worlds. The Snipe is such a great boat to promote to women sailors. "All those lines" that some have been complaining about make the Snipe a perfect boat for women's teams because they allow for a great range of competitive crew weights and strengths. It hooted in both Japan and Spain and, even though the average crew weight was significantly lower than normal in coed events, the fleets handled themselves very well.

So like many new converts, I am now a zealot. Last year we held the first Women's Nationals here in the US. By all measures it was a success - it got new women into the Snipe (at least one has purchased a boat since), it got women who normally crew at the helm, and everyone who participated had a great time. Again, not a cat-fight to be found anywhere. This year not only are we in the US hosting the second US Women's Nationals the weekend before the US Nationals in Gull Lake, we are also hosting the 3rd Women's Worlds in Annapolis, MD on October 3-7. So here's my plea: If you know of any women sailors who are not already Snipers, here's a great promotional opportunity to get them into a boat. If you are a woman Sniper, PARTICIPATE! Don't fret over logistics, let apathy take over, or worry about whether you are good enough, just figure it out and COME! I promise you will become a convert, too.